OSM Atlantic is following closely a series of articles published in the Quebec press La Presse and Les Affaires in the last few months presenting the multiple challenges of the maritime sector in Quebec.

The Quebec government stated in its Avantage Saint-Laurent Strategy, published in June 2021, that "maritime transport is an alternative to road transport, with many economic, social and environmental advantages". The goal is to reduce the movement of goods by truck by transferring them to ships, a transport mode that is generally more ecological. However, this type of transport requires more time and lacks flexibility. Is this realistic? The article in Les Affaires draws a picture of the situation.

Indeed, the benefits of maritime transport are often not well known. According to Mathieu St-Pierre, president of the Société de développement économique du Saint-Laurent (SODES): "When a ship arrives in a port, it carries the equivalent of a thousand trucks or 300 train cars.  In the article in La Presse, the SODES advocates the collaboration of St. Lawrence businesses to promote opportunities in the maritime sector, both in terms of technological innovation and labor. 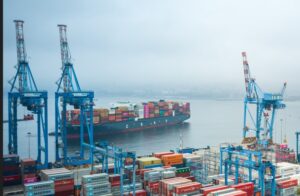 Another article in La Presse on the maritime industry calls for greater collaboration and strengthening of supply chains through partnerships with government institutions, ports and the private sector, i.e. carriers and service companies. "The marine sector contributes $4.3 billion annually to the national GDP, economic output is over $8.5 billion and over 213,000 jobs in Canada's ports are directly dependent on the activities of (Canadian Maritime) Coalition members.

OSM Atlantic is a proud partner in this ecosystem by providing maintenance and repair services for large Diesel engines. Thanks to its portable equipment, interventions can be carried out even at sea. Among its clients in the marine sector are ferry operators, notably CTMA, which provides transportation between Prince Edward Island and the Magdalen Islands. Cruise ships that dock in the Islands are also among its clients.

News Releases
Happy Holidays from the OSM Atlantic Team   The OSM Atlantic team wishes you a very happy holiday season! Stay healthy and get involved in exciting projects in the new year! We thank you for your loyalty and support. We remain available during the holiday season for any emergency related to  large diesel engine repair […]
Read more
News Releases

Partners of the marine innovation ecosystem visit the Magdalen Islands

During the last two months, OSM Atlantic took part in several meetings with visitors from the innovation ecosystem as well as with business partners of the company. - During the tour of the Quebec Chief Innovator, Luc Sirios, in October 2022, Jean-Sébastien Aucoin, president of OSM Atlantic, participated in a panel with companies accompanied by […]
Read more